Crowds gather to watch the various street performers on a Saturday afternoon in Groningen. One section of the road has been closed in the centre. Nevertheless, on the other side of town, to the north, the residential area lies dormant. The warmth of the Indian sun gently breathes light onto the terraced housing. Only the odd cyclist is in view, along a street lined with parked cars. This is solace away from the clutches of the working week.“Come back at 5pm Messi!”, shouts the hirsute 51 year old Tony Tonkeus, to one journalist dressed in an Argentine jersey. His words are met with a few chuckles by his fellow workers.

Da Tonk  is Tony’s tattoo parlour. It pays homage to his idol, the legendary graffiti and tattoo artist known as Seen. Seen hails from New York City. Da Bronx is Seen’s tattoo studio in the Bronx. Tony’s establishment likewise pays tribute to his family name. Da Tonk is 1 of 7 tattoo parlours in Groningen. Shortly after 5pm Tony joins me on a bench outside donning his uniform, which is a white vest with a few wispy hairs poking out at the top of it. He’s around 160cm in height and a little rotund. By his own confession, Tony arrived late into the artisanship of tattooing at 26 years old, tracing his humble beginnings back to an age when there was no internet. Instead he wrote a letter to America, which was the sole place to source his equipment. After the hefty investment of 1500 Guilders, a package later arrived complete with colours and needles. With a glint in his eye and a boyish grin he recalls “I was more happier than the newest playboy”.

As a child he’d harboured dreams of going to art school to perform. Alas the opportunity never materialised, as his parents worked on the market place. He heeded their advice and began studying business. “I was not happy and you do stupid things if you’re not happy” divulges Tony. In keeping with his dislike towards the pressures involved with paperwork and business, he leaves this undertaking for the “boss”, his beloved wife.

Tony ask whether I have any ink work myself. I tell him I don’t. Perhaps I’m not welcome into this community but with a cheery smile Tony continues unabated. “I started with a little tick, when I was 14”. Tony now has over 300 hours worth of tattoos and is unsure of the exact number he has. Nevertheless, it’s a visible change, as his body is now entirely adorned from neck to toe in ink. The tattoos come in a myriad of shapes and colours. One notable tattoo on his rib cage is that of a VW Campervan. He is known to take off in his camper van from time to time, to escape the pressures of the daily grind. Another zigzag shaped tattoo on the palm of his hand is the vehicle’s gear stick, which was the most painful one to date, he informs me.

Tattooing – the broader connection and symbolism

Tony is coy on the symbolism of his ink-work, when I ask him directly what they symbolise. Instead he recounts his story. He travelled to Bangkok to be tattooed, receiving one in Thai lettering, complete with 2 small Buddha images. In asian practice the artisan decides who to tattoo and can even turn people down on occasion. Tony dislikes the modern day commodification of eastern traditions by the West, despite the fact that many sailors brought tattoos over to Europe in yesteryear. Thai tattoos contain phrases in the local language, Pali which are said to offer all manner of fortune, charisma and power to the individual. At this point he becomes more animated, moving his hands closer to his leg, pretending to grasp and carve a pole into it. The practice of yantra tattooing is undertaken with a sharpened metal rod by Buddhist monks in Thailand. He then rolls his shorts up to show the green tattoo design below. He has no hobbies and comprehensively dedicates himself to the perfection of his noble art. In keeping with the notion of being selective, a practice also undertaken in Japanese tattooing or Irezumi, Tony too is selective to those he offers a service to. He prefers to keep politics out of his artistry. “I keep my shop clean”, he declares.

There is a distinctly oriental aura to his persona and enterprise. He recalls his youth in Groningen where his fascination first began. There was a tattooist studio in the red light district which displayed fully tattooed Japanese people, or in vernacular, in complete ‘body-armour’. Inside Da Tonk, the walls are decorated with many keepsakes from the orient, ranging from several figures of the Buddha to differing pieces of artwork. Discussion moves onto how in bygone Japanese eras only criminals and prostitutes had tattoos, which explains how tattoos later gained a lower class status. Tony believes that the taboo is now gone. Nevertheless, the Yakuza, today’s modern day criminals and gangsters of Japan, bear tattoos to depict their clan affiliation. “I only look at it in an artistic way”, explains Tony dismissing this notion.

At this point Tony begins to shed some light on his craft, which he has dedicated a quarter of century towards, divulging how his preference is towards traditional Japanese tattooing. “It’s got everything a tattoo needs actually, nice lining work, shading and brilliant colours” as he ponders in an enthusiastic manner, scratching his hairy chin. Gakkin is one famous Japanese tattooist who has gained much publicity worldwide, through his use of Instagram, to promote his freehand black ink artistry. Tony is more circumspect and explains he’s currently learning how to operate a computer. In fact, ‘the boss’ handles all of his enterprise’s social media affairs. He qualifies his artisanship to be akin to a chess player, whereby one must always be a step ahead in thought. In general, Tony is flexible on meeting the needs of the customer and he offers freehand tattoos, stencil-work, as well as written tattoos

His contribution has touched all the levels of the local community. He is a proud resident of Groningen and still feels connected to the locals. In his youth he used to attend many football games at the local stadium, The Oosterpark. He has had the satisfying role of tattooing the club crest on many fans. By extension, his portfolio includes several notable footballers, the Dutch goalkeeper Marco Bizot and the Uruguayan contingent of David Texeira and Matías Jones, all of whom have represented Groningen. Overall Tony explains his sense of duty to care for locals. Earlier today there was a young lady in his studio, whose father had died requesting a tattoo. Tony was adamant that she must wait at least 5 years, to ensure she is happy to honour him with some ink. “She was so happy, she hugged me. That’s the cool part of tattooing, you’re so close to people”. 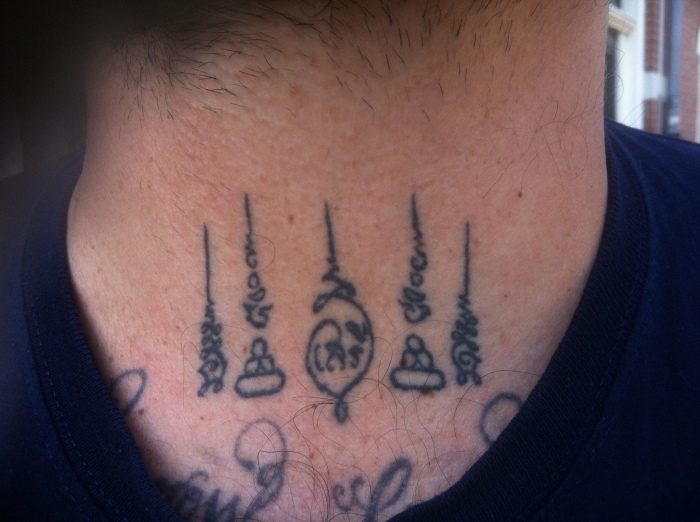 Tony beside his studio

The gearstick from Tony’s VW Campervan 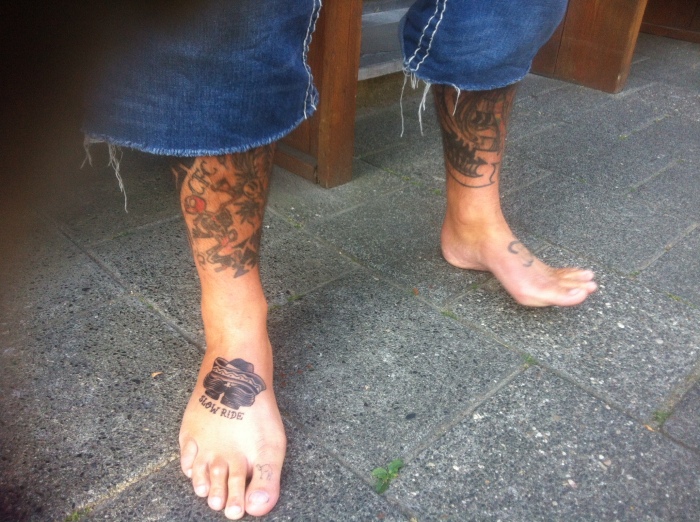 Tony’s new tattoo on his foot