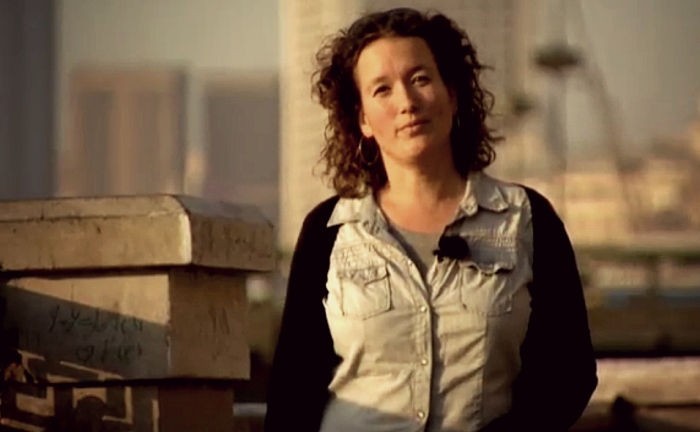 The first time she left to report from the Middle East, Esmeralda van Boon was a young intern at NOVA, a  Dutch TV company.  She was driving down the Highway of Death in Iraq, a six-lane alley that was severely bombed during the US invasion. Back then, she did not know where that ravaged road would bring her. Almost like a young Jack Kerouac, she had nothing behind her, and everything ahead of her.

4 years and 3,000 miles away from that moment, Esmeralda was about to begin a degree program in Arabic Studies at the Rijksuniversiteit Groningen. Back in the late ’90s, people did not really understand what job opportunities this could grant you.

“What are you going to do with that?”,  her parents kept asking. Despite her family and friends questioning her, she never dithered. She was utterly determined to become a journalist, a correspondent from the Middle East.

“You are always  free to dream whatever you want, chase that dream, and see what it becomes”, she says, with a humble glimpse of pride in her eyes.

During her studies, she took every opportunity she had to travel to the Middle East and soak up every aspect of the millennial culture that laid so much charm on her. The day of her graduation, while defending her paper in front of the university committee, she couldn’t help glancing at the clock every five minutes. She worried she would miss the flight to Northern Iraq, where her Iranian best friend was waiting for her, to start a 4-month trip together. Just one of the many, many journeys that brought Esmeralda to explore almost every corner of the Middle East.

Far from the Netherlands and Esmeralda’s final years of study, in 2003, a coalition led by the USA invaded Iraq to depose of its dictator. American armies invaded the country, Saddam Hussein was ousted and the Ba’ath party was disbanded. 2 years later, the country held elections.

At the time, it was Esmeralda’s first week of an internship. Sitting at her desk, she learned about the news and quickly started to make some phone calls. Sooner said than done, she got in contact with the new leader’s personal secretary. When she told her boss, he wouldn’t believe her. “That reaction made me think ‘I really want to do this, I have to make this story’.”

At the end of the day, not only did she get hold of an interview with the newly elected leader, but she also obtained the permission to film him at his home and office for one entire week. With the support of an older reporter, she went back at the editor’s desk and persuaded him of the truthfulness of her source.  Still, she got a negative answer. “We are going, you are an intern. You’re not going.”

Almost 6 years later, Esmeralda was on  holiday, relaxing in a hotel room with her boyfriend. Suddenly, she saw him rushing into the kitchen to make coffee and starting to pack their things. “What are you doing?”, she asked. Then, she took a glance at the television screen and was bowled over by the images of the Libyan revolution that were being displayed. Tripoli was about to fall, Gaddafi’s regime was on the edge of collapse. Before even having the time to get a full understanding of what was going on, she got a phone call from her editor. “We have to go to Libya”, he said. She left that very night, not knowing exactly what she would find there.

Eventually, what they found was war. Rebels were still fighting what was left of Gaddafi’s troops and there were snipers all around the city targeting revolutionaries and everyone who was with them. When they arrived, they immediately had to rush into their car and, under snipers’ open fire, they headed to a safe place. The camera men never stopped filming and the images of Dutch journalists, being shot at by Gaddafi soldiers, spread all around the Netherlands. They did not know that, though. All they knew was that they needed to find a shelter for the night. So, they took cover in a school which was split in two: one wing was in the hands of the revolutionaries, while the other was used as a prison by Gaddafi’s regime.

In the middle of the night, Esmeralda was woken up by a rebel who was screaming in Arabic: “He has a gun! He has a gun!” The first thought that went through her mind was that there might have been a sniper with a Rocket-propelled grenade targeting their building. Quickly, they put on their helmets, their 9-kilo-heavy bullet proof vests, and fled. “That was scary as hell.”

As soon as she felt safe again, she called her dad. She recalls he picked up the phone and just said: “You are safe again Esmeralda, aren’t you?”. “Driving in the desert, with the stars and the moon…it was really poetic. That is a phone call I remember”, she confesses.

None of these incredible, breathtaking experiences could that young intern even imagine. But despite her age and very little experience, that day, 6 years earlier in the editor’s office, Esmeralda claimed her rights on her story.

“We are going, you are an intern. You’re not going.”

“No one is going to Baghdad then, these are my contacts and I am not giving them away”, she argued. Her boldness left her boss with no choice. He hired Esmeralda with a one-month contract and sent her to Iraq to chase her story. “And we left. And it was intense, it was beautiful”.

When she came back, her career as a journalist began. Since then, she has reported from Libya, Syria, Gaza, Egypt and many other complex scenarios, always trying to tell the stories of normal people, always chasing the truth, providing readers not with what they want, nor with what they need, but with what is there.

And Iraq, ironically, is also where her journalistic career ended. It was July 2014, she was in Mosul reporting on the IS, and she recalls thinking, “that is enough, I don’t want to do this anymore.”

Now, 10 years later, her life is different. She has a daughter, she works as a manager in a refugee center and she likes it. However, she still recalls the moment, while traveling to Baghdad for her very first reporting job, when the camera men looked at her and asked:  “Esmeralda, are you completely sure that your contact person in Baghdad is not lying? That we can actually be with the President and film him for a week?”

For one moment, her natural confidence almost fell apart. “I felt nauseous.” Luckily, the guy was telling the truth.

“I trusted my own feelings. That was something I learned back then, you should always trust your gut feeling.”

One thought on “Esmeralda’s Arabian nights”