Peru are 1-0 down to Argentina in Lima. 19 year old Luiz ‘Beto’ da Silva enters the field for the second half, making his debut in the South American World Cup qualifiers. His pace and dribbling are outlets for the counter attack against Argentina. Defender, Zabaleta can’t live with his direct attacking play and quickly receives a yellow card for a cynical challenge from behind. Then a searching cross field ball from left back Trauco picks out the Peruvian striker, Guerrero, just outside the penalty area. He chests it down and comfortably dispatches it into the goal. The cheer of 50,000  jubilant fans fills the stadium. Guerrero and Beto embrace and run in celebration towards the sea of red and white. Other players quickly join them demonstrating the solidarity within the squad. A wonderful display of technical and competitive football finishes 2-2. Peru “were able to demonstrate what we’re all about,” confirms Beto.

“It was all down to my dad,” begins Beto, dressed in a grey cotton tracksuit.  “My dad was a professional footballer,” as he continues in a relaxed mood after training at PSV Eindhoven’s training complex, De Herdgang. This is his first interview with British media. He maintains good eye contact throughout the conversation, recounting his father’s distinguished career as a footballer. Luisinho, played for Internacional in Porto Alegre and later Atlético Paranaense in Coritiba, Brazil. “Around ’95 he played a few more years in Peru with Melgar from Arequipa. Then he went to play with Alianza (Lima), where he had a terrific season and met my mother,” confirms Beto. Luciano, Beto’s older brother is also a professional with the reserves of Sporting Cristal.

Having a Brazilian father and a Peruvian mother exposed him to both cultures from an early age. It also provided some challenges.  Once Luisinho’s career finished and whilst Beto was playing with the youth team of Universitario in Peru, the family moved to the south of Brazil. “When I left for Brazil, I still didn’t speak the language, I knew a few words but couldn’t really speak it. It was difficult around my schooling, then once I learnt the language it became much easier” says Beto.

Beto’s earliest memory of football was of watching the 2002 World Cup with his father. Both are big Internacional fans. Whilst growing up Beto idolised Alexandre Pato, whose early years were explosive. He was widely lauded for his dribbling and goalscoring prowess at Internacional, before leaping across the pond with AC Milan. Injuries hampered Pato’s career, yet Beto still holds his achievements in high regard. His own creative style of play is a fusion of both Philippe Coutinho and a younger Pato. Beto is predominantly right footed, with a creative and adaptable attacking mindset, whether playing centrally as a playmaker, which he prefers, or deployed more on the flanks. 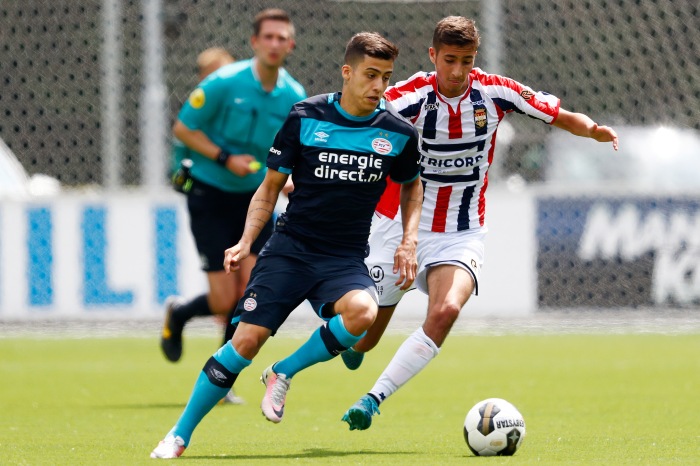 “I used to go straight after school to training. I had to take a bus. I went there carrying my little pot of rice and black beans,” jokes an upbeat Beto in reference to the Latin American staple.  After Universitario, he began training with the youth ranks of Internacional.  Such an early commitment alongside his schooling was tough but he says it taught him resilience. Owing to a lack of game time, he moved to an arch rival, Gremio. “During that period they were both the biggest teams in Porto Alegre, which is why I wanted to play there. They gave me an opportunity and so I’ll always be grateful”, divulges Beto. At the time Douglas Costa, now plying his trade at Bayern Munich, was just breaking through their ranks.

Following a successful trial back in Peru, Beto signed for San Martín. A difference in footballing ideologies meant he signed for Sporting Cristal, debuting against Alianza Lima. “I was used to playing with nobody in the stands and now there were 60,000 people. I was really young, just 16. There were always going to be a few nerves. You have to learn to play with professionals, it’s different. When you play with youngsters, they run more whereas with the first team you have to think more,” explains Beto on his adaptation to professional football.

Sporting Cristal won the domestic league in 2014. “We had to win the game at whatever cost. It was like being in a final at just 16. I wanted to get onto the field and unfortunately in the end I couldn’t. Thankfully we won and it contributed towards another medal in my career,” says Beto. There was a celebratory open bus journey with the trophy through Lima. Winning the league title firmly helped to establish him as a household name in Peru.

Beto’s favourite goal was against Vallejo in the semi-final of the Peruvian play-offs. The goalkeeper throws the ball out to the centre circle. Beto controls it and begins to accelerate forward. Just outside the penalty area two players attempt to tackle him. He puts the ball between them and they both collide with one another. Beto then confidently strikes the ball left-footed into the back of the net.  All of the coaching staff and players pile on top of him in celebration at the corner flag.

Beto was presented as a PSV player at the beginning of January this year, signing a contract until 2018. This includes an option to sign for a further two years. He discloses it was a conversation with close friend and Ex-PSV and Peruvian striker, Farfán, which helped to make his mind up. This season Beto has played primarily for the Jong PSV team(the under 23 squad), as he looks to transition into the first team. Team Manager, Pieter Busscher confirmed that, “he’s adjusted to the Dutch culture pretty good.  He’s got to take some more steps but we’re being patient with him”.

Jong PSV have started the campaign well and sit first in the second tier of the Dutch league. Beto has featured in 6 games, being used primarily as a left-winger and also as a number 9. He notes a clear difference in the climate, pitches, weight of passes. “Over there (in Peru) the game is a little slower, more skilled, in the sense of dribbling one on one, here it’s more tactical,” he explains, before adding “I want to play well to be able to play in the first team, which is what I came to do here.” Alongside the other players he communicates in English, something he has worked hard on off the pitch.

One visible feature with Beto is the array of ink which adorns his body. There is one of an angel’s wing on his neck. He got his first tattoo at 15, he says whilst rolling up his sleeve to show the plethora of ink on his arm. This includes the name of his mother and father. He explains that many of the tattoos have a religious symbolism. “Whilst I’m here I always try to go to Church,” he reflects.

Beto explains that his faith helped him through a difficult period when he ruptured his tendon at the back of his leg.  He was out of action for nearly a year.  Whilst living here, away from friends and family, the Latin American contingent at PSV have taken him under their wing. The Colombian Arias, Uruguayan Pereiro and both Mexicans Moreno and Guardado all regularly go for meals together. Culturally he still holds many ties to his homeland. He misses eating cerviche, a raw fish dish, typical across Latin America. Beto confirms with a light sigh that he’s finished the original Colombian tv series on Pablo Escobar. One thing he does divulge with a giggle is his taste for romantic films.

The pinnacle for Beto was making senior debut in the lead-up to the Copa América against Trinidad and Tobago in May. In the 38th minute Beto latches onto a pass from Cueva just outside the area. He jinks inside the area, passing defender Abu Bakr and calmly slots the ball into the net. “It was a really beautiful experience. At first I was a little nervous. I really wanted to play well,” recalls Beto on scoring on his international debut. Peru won the game 4-0.

Within the national team he describes an “affinity” with the other players, they always eat together and the senior players are always happy to pass on their advice. Such an affinity has been translated into their on-field displays, most notably in the Copa América, beating Brazil to reach the quarter finals. Beto explains that Careca, the Peruvian coach, is putting together a competitive squad. On a more personal level, “he has faith in my abilities and has put a lot of trust in me. He always telephones me and he believes in my game.” Beto has once again been selected to face Paraguay on 10th November and then Brazil on 16th November.

When asked to summarise himself he humbly reflects, “I’m a calm kid with a lot of ambition, who came here to play and achieve things with the first team”, pausing, before adding “and a romantic kid,” with a wry smile.