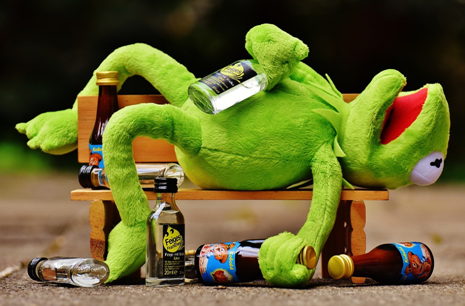 A technical loophole is allowing underage drinkers in the Netherlands to get alcohol delivered to their doors almost free from age checks, and delivery companies can sell free from fines. The student city of Groningen provides a telling example, with local authorities passing the buck as kids pass the bottles.

Delivery companies and underage drinkers are left free from repercussions

“There is no fine at all in the whole country, they know the weaknesses of the system”, says Wim van Dalen, Director of the Dutch Institute for Alcohol Policy (STAP). He explains how it is impossible for local authorities to accept a complaint from parents whose kids have purchased alcohol via a delivery company. As when the alcohol is bought and delivered and there is no official authority present, no legal action can be taken against the company. This leaves delivery companies and underage drinkers in a completely repercussion-free trust system. According to van Dalen, “As long as it [the online ordering system] is open, no control can be made.”

“As far as I know we haven’t done anything with delivery services”, says Hans van den Biggelaar, from the municipality of Groningen. As far as he knows, no clear plan is being discussed and the issue does not seem to be present in the municipality’s “to do” list.

The waters get murkier when looking at how to maintain compliance with age restrictions. The city of Groningen again provides a useful example of the confusion. According to a Police Spokesperson for the city, “The police does not enforce the age restriction for the sale of alcohol”. She went on to say that the police decide on punishment for underage drinkers in the streets on a case-by-case basis. “When we come across youths drinking alcohol, if kids are just drinking a couple of beers they will get a warning and their parents will be notified. If the kid is really drunk we will report it to organisations like Jeugdzorg (Youth Care)”. However, the police insisted the responsibility for delivery companies lies with the NVWA (Dutch Food and Wares Authority).

“We haven’t been responsible for the enforcement for years”, says an NVWA spokesperson when confronted with the claim. They in turn, point the finger of enforcement at the Municipality of Groningen.

“I thought that was the task of the NVWA” an employee at the Municipality tells us when first contacted. However upon further enquiry, we were directed to Hans van den Biggelaar, Team Leader for Enforcement at the Municipality, who acknowledged that the issue of delivery companies falls under their administration.

Van den Biggelaar admitted that the alcohol loophole of delivery companies is a problem that they are aware of. “In general you see that youths are ingenious. In this case, I can imagine this is a way that does not result in a lot of ID-checks.” In reference to the delivery company Bavaria Bierkoerier, that simply requires users to fill in their age online whilst ordering, he commented, “It seems too little to me because every kid will just fill in 18. Instinctively I’d say that is not enough because committing fraud is too easy here.” Despite the awareness of the problem, the municipality has yet to offer a solution.

STAP’s statistics show that, while in general underage consumption has gone down since the age limit was raised from 16 to 18 in 2013, there has been a significant decrease in ID checking by delivery companies. In 2015 only 9% of those companies tested checked for age upon delivery, in 2016 this number fell even further to 2%. The study was conducted with customers as young as 15.

“We see in general that minors drink less and they start to drink alcohol at an older age”, says Leonne Gratz, spokesperson for the Dutch Ministry of Health. However, when asked specifically about policy regarding delivery companies, she wouldn’t comment further than to direct us to Government statistics. Although the Ministry does acknowledge the problem of ID checking according to a press release published on their website, they have not found a suitable solution yet. They reckon the complexity of the issue is related to the fact that delivery companies are transnational and thus it is difficult to control and oversee their activities.

Groningen Municipal Healthcare Service (GDD) monitors a broad range of health-related issues and behaviours. They confirmed the drop in overall alcohol consumption amongst underage drinkers. “We see the trend of first time drinking age has changed in the period of 2012-2015. Numbers relating to alcohol abuse have improved, we see in our study and also in national data”, says Martje Folkertsma, GGD Public Health Policy Advisor.

Folkertsma believes that the continued problem with delivery companies is cultural rather than policy, “it will take a while for cultural norms to adjust. Parents, for example, are still quite permissive on drinking. We focus our policy more and more on the environment of youth and setting examples. By this, we influence the cultural norms.” 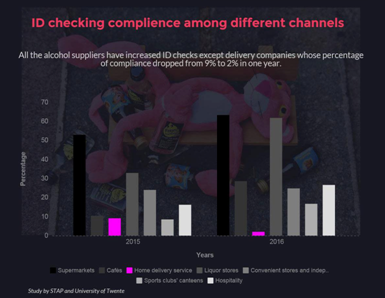 The trend might be a reduction in alcohol consumption by minors, but while some people focus on changing attitudes instead of enforcing compliance, the effects of alcohol abuse can still be seen. The nationalezorggids.nl (An online National Care guide), states that in 2015, 122 young people arrived in the emergency room in the two provinces of Groningen and Drenthe. That number is comparable to the previous year. When looking at the year as a whole, the National Care Guide suggests that “every three days there is a paralytic teenager inside hospital”.

The problem is also highlighted by the Wilhemina Hospital in Assen, which has a special paediatric unit specifically for dealing with youth alcohol abuse.

“I am 100 per cent sure that they do check,” claims a spokesperson for Bavaria Bierkoerier, one of the largest alcohol delivery companies in Groningen. He went on to say that “it has become more strict, so of course when the age changed from 16 to 18 we needed to adjust the policy.”

According to the spokesperson, this 100% age verification is maintained with periodic checking by Bavaria. However, the statistics for delivery company compliance quoted by STAP, make this claim at the very least questionable.

Apart from the online services that only supply alcohol, another difficult matter is how online services from supermarkets like Albert Heijn work. If one orders groceries from these stores, one also has the option to include alcohol in the box. The orders are shipped by the supermarket in sealed packages and, in the case of AH, delivered by a third party. This third party has no knowledge of what exactly is in the order so it can be assumed that they do not perform ID checks when doing their deliveries.

Van Dalen, Director of the Dutch Institute for Alcohol Policy, suggests that supermarkets are obliged to know – “as they made the box” – what’s inside it, and as such should inform the third party delivery personnel. “They are obliged because they know. They say they do but they don’t.”

Hans van den Biggelaar, from the municipality of Groningen thinks that it is easier to make sure the ID checks are performed when a third party delivery service is being used. “Typing something [filling in a birth date] online does not prove anything, but a deliveryman can ask for actual proof,” he says about this, “I can even imagine that you could say to the delivery man that you cannot know what exactly is in the order, but you do have to check ID for the delivery.”

While Police, Municipality, Ministry, advisory bodies alike, to different degrees, all acknowledge the loophole in policy, possible solutions are hard to agree on, and harder to implement.

“We said to the minister of Health clearly the only solution is a complete ban of selling alcohol through the internet.” This is the definitive solution for Wim Van Dalen of STAP. It’s difficult to see the STAPs recommendation becoming policy, yet he claims “the law in is elaboration phase, they listen to us but we have to wait until a new law is made. The other solution would be very technical this is the only solution.”

The ‘other solution’ Van Dalen speaks of is suggested by Dr Joost Mulder, senior advisor to Municipalities. “The only serious option seems to be mystery shoppers, underaged, that order alcohol at home in collaboration with alcohol law enforcement officers.” Dr Mulder also works for the Trimbos institute who specialise in addiction research and advisory.

In a press release, the Dutch government admits that with the sale of alcohol through the internet “adherence to the age restriction is incredibly bad.” To deal with this problem they have charged secretary of state Van Rijn to investigate how these practices can better be overseen. The government has stated that from the evaluation of a specific alcohol law (Drank- en Horecawet) new measures to combat the problem could be implemented. However, at this stage, they remain completely powerless and no solution is forthcoming. The delivery companies have carte blanche to continue selling alcohol to children without fear of repercussion.