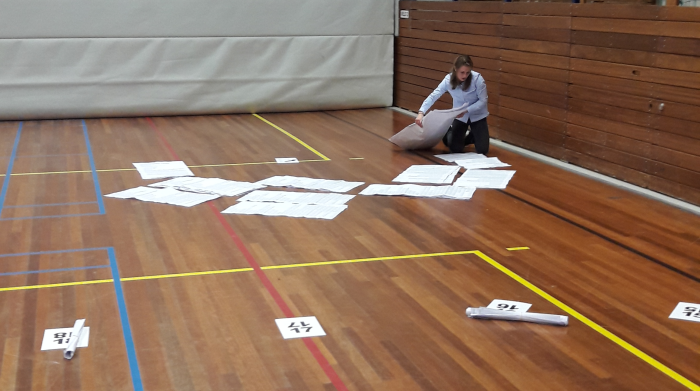 At 21.00, the large grey wheelie bin serving as a voting box was ceremonially sealed in Sporthal Selwerd in the north of Groningen, only to be unlocked and upended a minute later, an avalanche of papers spreading out in the middle of the gym hall.

Scenes like these could be seen all over the Netherlands from the moment the final vote was cast for the Dutch Parliamentary Elections on March 15th. All ballots were then to be counted by hand, following a strict protocol prescribed by the municipality. Cue cards with numbers on them had been placed on the floor across the room, each number representing one of the 24 political parties for which the Groningen electorate could vote.

Sporthal Selwerd hosted two of the city’s 123 polling stations, with two separate counting teams. I counted in one of them, alongside two other students, three polling station volunteers and the station’s Chair and Vice-Chair. We started unfolding the massive ballots, placing all 900 of them at the corresponding number, separating the votes for the party leaders from the votes for the others on the list.

None of the running parties was polled to win a decisive amount of seats in the lead-up to the election, and it became clear during the counting process that the electorate had remained divided, even on the day of the elections. The eight of us were soon breaking a sweat squatting at the piles of votes, chatting away about the elections themselves, the surprising amounts of votes for D66 and GroenLinks leaders Pechtold and Klaver, and the size of the voting ballot that had made foreign correspondents’ mouths fall open in awe.

The Dutch ballot with 28 parties in the running. I needed two producers to hold it up! #DutchElection pic.twitter.com/bhMjyEL5xi

The station’s volunteers seemed eager to start counting. “I have been here since 10 this morning, I am ready to start,” the station’s Vice-Chair told me, almost relieved, right before the clock struck 21.00.

Careful to not bump into each other while scurrying from the one side to the other side of the room, we discovered that submitting a valid vote can still be done in many different ways, even though every individual votes using the same ballot and the same red pencil. Unsurprisingly, folding the ballot had clearly proven to be a nightmare for many. Some were folded beautifully, some poorly (often by voters of the 50PLUS party), and others were barely folded at all. Many people clearly took time to carefully color all of the circle, with others just ticking it and getting on with their day, having done their democratic duty.

Nonetheless, not everyone managed a valid vote. One person mistakenly voted for the wrong person and ended up voting for two people instead of one, rendering their vote useless. Another made a valiant effort to support Wilders’ PVV by spending their time voting for all 50 of its candidates, coloring in all circles as if the ballot were a coloring book. 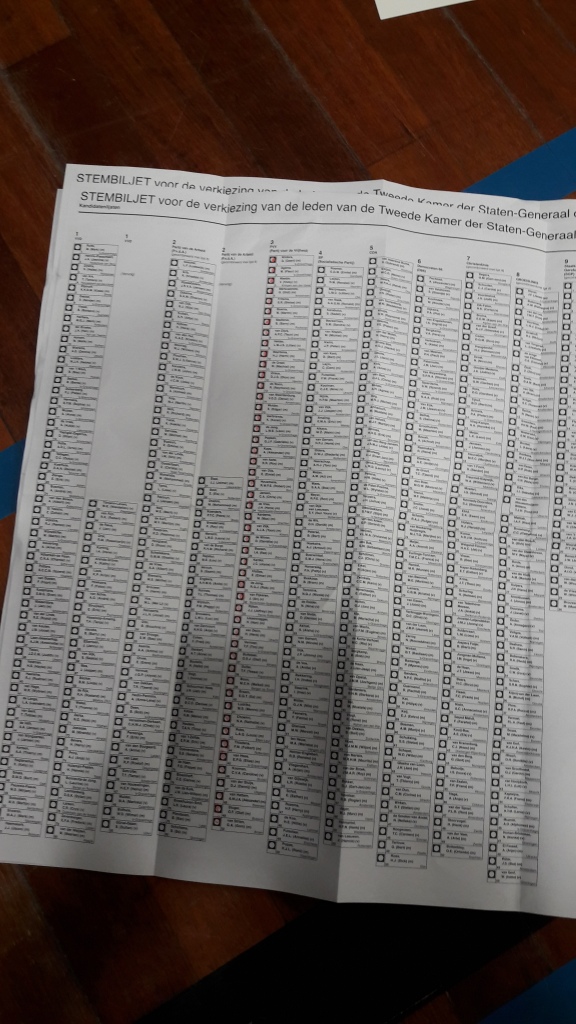 After the sorting followed the real counting. Each voting station member retreated to a pile of votes to count the amount of votes each individual received, before jotting the numbers down on a municipality-printed list.

The station’s chair then entered all the results incoming results into an iPad through an official ‘voting tracker app’. At 23.30, the results had been submitted and the ballots had been stowed away in a bag in the wheelie bin. The lights were flicked off, and everyone headed home. 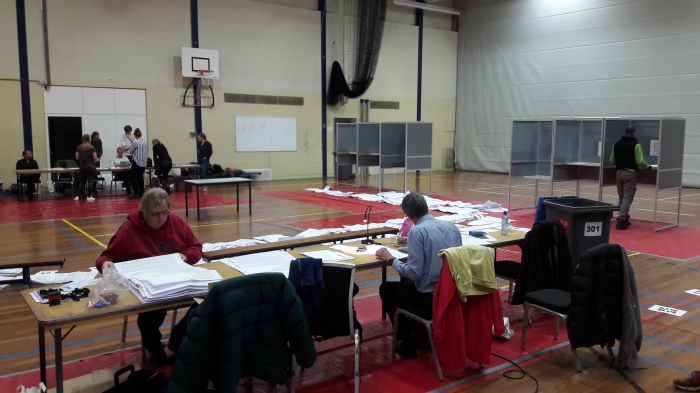 At this polling station, D66 and GroenLinks were the clear winners, each getting about 20% of the votes, followed by the socialist SP, overall winner VVD, and Wilders’ populist PVV.

When NOS news anchor Dionne Stax presented the overall results for Groningen half an hour later, it was revealed that D66 had received the most votes in the city. Our polling station’s results turned out to almost exactly mirror the overall votes for Groningen. Without us knowing, Sporthal Selwerd had the scoop.