by Ines Mette and Anna Severinenko

“The body is both Apollonian and Dionysian.” Exactly. No idea. Reading the program of the performance Le Corps du Ballet National de Marseille the piece and its meaning remains highly mysterious.

Groningen. Saturday night. The Ballet de Marseille is performing at the Stadtsschouwburg, the event is almost sold out. The stage doesn´t offer much more indications as to what is about to happen other than a surrounding chain curtain. Suddenly, a heavy rhinoceros breathing sound confuses the atmosphere. Not a common start when expecting graceful ballet dancers.

The surprises don´t end there. During the performance, one gets the impression of watching many different ballet pieces with steadily changing number of dancers, all kinds of ballet styles and a messy music playlist.

Classical piano suddenly turns to Pink Floyd followed by remixes of French reggae and French rap. The focus on France got obvious as the music shifted to various versions of the Marseillaise, from the traditional one to Serge Gainsbourg’s rendering of it. 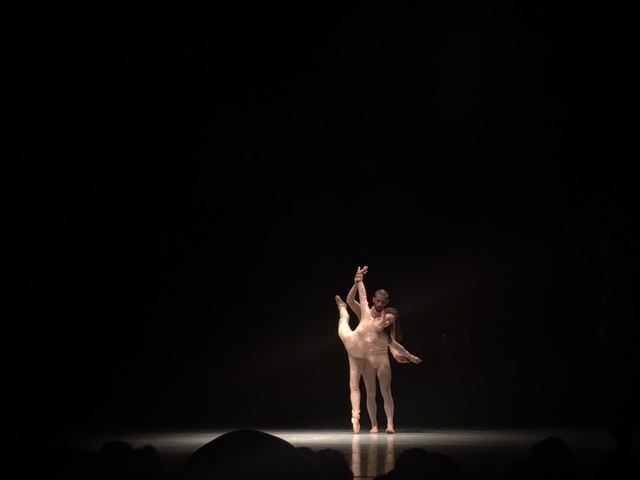 The performance stretches over the full 85 min leaving neither the audience, nor the dancers a break. Dancers appear on the stage with masks, cigarettes (well, French..), the heaviness is absorbing. You are getting lost in the abstract universe. Even though there is no recognizable narrative in the piece, it was impossible not to be taken aback by it.

“You forget sometimes to breath” says Emio Greco, one of the choreographers.

As the performance unfolds, the chaos becomes a unity, things start to make sense. The piece focuses on the relation between the group and the individual, alternating between solo performances and group compositions. The clash of dance styles, and music from French rap to French hymn celebrates a heterogeneity, as represented in the nation of France. And pointing at France, it reminds of the European spirit. A variety which forms a unity.

Emio Greco and his colleague Pieter C. Scholten dedicated this piece to the individual in the mass, to diversity. “We need to be together, to be unified. We make a nation with different people.”

A message which makes more sense more than ever in our times. Apollonian and Dionysian still do not.